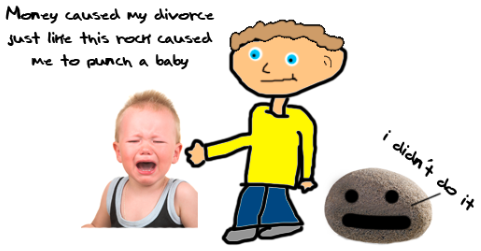 Last night, Girl Ninja and I completed another pre-marital counseling session (which I would recommend all couples do) and dabbled a little bit in the financial aspects of marriage. We have not yet gotten to the ‘finances’ section yet, so the BIG “money talk” is still looming.

One thing, though, did stand out to me during our conversation with the couple mentoring us. The husband said “Money is the number one cause of divorce in America.” Nothing shocking right? If you listen to Dave Ramsey, he spits that statistic out all the time. Call me crazy, but I’m going to have to disagree with Mr. Ramsey. I don’t believe “money” is the number one cause of divorce. I’m willing to bet behavioral issues, tied to money, are the real root of the problem.

I did a little internet research (I know the internet is not always the most reliable source) and here were a few of the most common reasons people have money issues….

Ownership: family members fight over ‘my money’ or ‘your money’ instead of ‘our money’. Variations are… who manages the family checkbooks and savings accounts, who’s responsible for paying bills

Incomes and earnings: a family member resents that another isn’t earning enough (or anything), and should ask for a raise, change jobs, or get a job. A variation is someone feeling chronically inferior (ashamed) and/or guilty because they’re earning or contributing less than a mate or other relative.

Lack of compromise: One person handles money one way, the other handles money differently. Instead of discuss things and meet in the middle, all anyone is concerned about is having things done THEIR way. The money discussions they have are not discussions, but debates. Where one person is trying to convince the other “My way is better.” Neither person is willing to sacrifice their financial preferences for the sake of a healthy relationship.

I don’t buy for one minute that money causes divorce. In fact, it’s impossible. Money is an inanimate object. It has no capacity to cause controversy. Instead, it is the differences in financial perspective, honesty, compromise, communication, and a whole slew of relational issues that are the real cause of divorce. I believe money is the symptom of divorce, but it’s definitely not the problem.

For those of you that are married, or in serious relationships, what have been the sources of your money fights? What means have you taken to work through those issues? Did you use LegalZoom for prenuptial expectations? Are there any freaks out there, that are in relationships, but have ZERO money issues? If you want to check out some of the most honest money problems I’ve ever heard, check out the comments on this post I did on financial secrets.

11 thoughts on “The real issue with money” 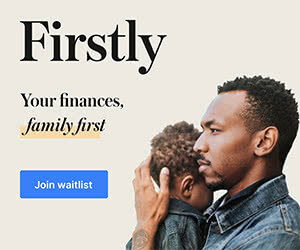