Before I get in to the content of today’s post, Let me be clear: I don’t represent or speak on behalf of the US Govt in any capacity.

My inspiriation for todays rant came from this article over at Fabulously Broke. The article includes a chart showing the relationship between Federal employee’s salaries compared to private sector salaries in a similar position. FB did a good job writing a relatively neutral article, with only slight undertones that Feds have the good life.  Anywho, here is a copy of that chart… 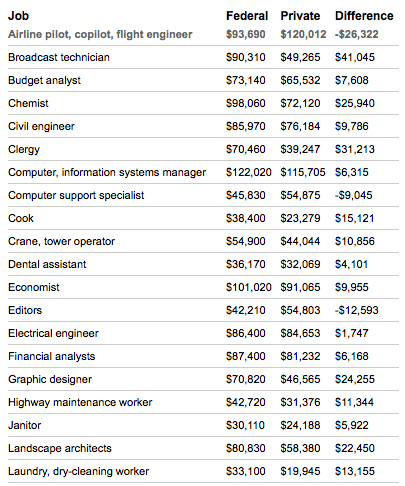 You’ll notice in all but two fields, the federal employee’s average salary is higher than that of their private sector counterpart. This appears to piss off quite a few people. Here are just three (out of 175) comments left on an article at BigGovernment (which also blogged about this chart).

While I definitely understand where these people are coming from, I do feel as though I need to at least defend myself a little bit.

I wrote a while back about how the government pay structure works. It’s important to remember that with the government, you know exactly how much money you are going to make in your current position. It doesn’t matter how good of an employee you are, your income can’t exceed your job series. This is not true in the private sector. You have the potential to earn whatever income you are worth (either by requesting a raise, working for a different company, or becoming self employed).

Sure the average federal civil engineer salary might be higher than the private sector equivalent, but there aren’t any federal engineers making more than the government has predetermined they can be paid. Not one. The highest paid federal engineers in the country might be making $150K/yr, but the highest paid private sector engineers are making millions. When you work for “The Man” you give up your right to continually grow your income. Personally, I think that is a pretty significant sacrifice.

I also think it’s interesting that this list leaves out some of the more common “white collar” professions. Namely, medical doctor and lawyer. I think I know why they did this however. There is no way in H-E-Double-Hockey-Sticks a federal physician’s/lawyer’s salary is going to be higher than their private sector counterparts. Possibly a little bias in the charts? I wonder how many other positions were left out in which this would also be the case?

Don’t get me wrong, I’m not at all trying to say those employed by Uncle Sam have it bad. ‘Cause I don’t think that is true. As is true with all companies, there are pros and cons to working for the fed. It’s not all butterflies, ponies, and happiness…at least I don’t think it is… and if it is I didn’t get the memo. For now, I have thoroughly enjoyed the benefits of working for Uncle Sam, but I personally think the salary structure of the Fed will eventually drive me to the private sector. I want the ability to earn what I’m worth, not what my job series says I’m going to be paid.

So, what do you think? Where did the bitterness towards federal employees salary come from? Is the bitterness really about the salary, or more about frustration with the government as a whole? Would you ever work for “The Man”? Why or why not? Do you hate me (please don’t answer that question if you do… I’m kind of sensitive :))

28 thoughts on “Federal Employees make me want to puke”