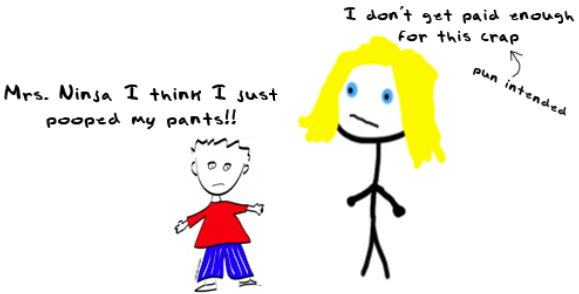 As you all know. Wife Ninja was an aspiring teacher, aka a substitute. She spent all last year subbing for a few different school districts in the San Diego area. She was lucky enough to end last school year with a long term sub position, filling in for two months while a teacher was on maternity leave.

We knew that the California economy is pretty much in the crapper, but we were still keeping her fingers crossed she would get a teaching contract. Last Friday, she got pump faked when a principal called her to say that he wanted her to teach at his school, only to find out a few hours later HR had already placed another teacher in that position. It totally bummed Wife Ninja out, which in turn made me bummed.

Tuesday was the first day of the school year and it looked like she was destined to continue on her substituting journey. That was until yesterday afternoon, when she got a phone call from a school she taught at last year, offering her a chance to open a new Kindergarten class.

The details are still fuzzy, and we aren’t clear what exactly the terms of the position are, but there is a good chance it is, at the least a long term subbing position, if not a 1 year contract. Either way, it means consistent work and consistent income for the Ninja household. I am super excited for her because she has wanted nothing more than to have a consistent classroom where she is the TEACHER and not just a SUBSTITUTE.

The upside to the position (as I see them) are:

2) Wife Ninja finally gets to be a teacher

3) Operation Save For A House will be in full force

The downsides to the position (again as I see them) are:

1) She has to work everyday

3) I’m pretty sure Kindergartners still poop and pee their pants…ew.

All in all. I’m pretty excited for her and I can’t wait to hear more about the position after she talks over specifics with the principal. A little boost in income never hurts. Long live the DINKS (dual income no kids)!!!!!

Throw her a little comment love below and let her know you are either A) excited for her B) jealous of her C) impartial because you don’t even know her.